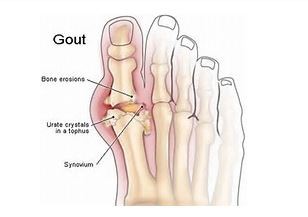 Gout is a common type of arthritis that occurs when uric acid (sodium urate) builds up in the blood, tissues, and urine. The uric acid that accumulates ultimately crystallizes and takes on a needle-like shape, which is its natural crystalline form. This crystal can circulate through the body and attached to the joints; ultimately jabbing into them. These crystals are VERY sharp and irritate the joint and surrounding tissues causing inflammation.

The joints most commonly effected are the big toe, mid-foot, ankle, knee, wrist and fingers. Acute joint pain is usually the first symptom, then the joints become inflamed—red, hot, swollen and extremely sensitive to touch.  The white blood cells that circulate to the site of injury during inflammation can actually get popped by these sharp crystals sending signals to the body to increase inflammation and send even more white blood cells to the site of injury.  This vicious cycle cascades worsening pain and injury. Repeated gout attacks can eventually lead to permanent joint damage.

The uric acid that accumulates is the end product of the metabolism of a class of compounds known as purines. Gout occurs when you either consume too many foods high in purines, bringing your uric acid levels up or when your liver and kidneys can’t effectively eliminate normal levels of uric acid. The liver needs to metabolize the uric acid before the kidneys can pass it out of the body through the urine. If there is a physiological deficiency of the digestive enzyme uricase, then uric acid is not made sufficiently water-soluble to be expelled by the kidneys and urine causing it to accumulate and crystallize.  This happens especially at lower temperatures, which may explain why joints in the extremities are most affected.

Approximately 70% of those who suffer from gout actually produce too much uric acid while the other 30% cannot properly make uric acid water-soluble via uricase and eliminate it. About 25% have a family history of gout. Poor kidney function can also play a role in the development of the disease.

Uric acid is the byproduct of certain foods, so there is a significant relationship between diet and the development of gout. Historical depictions of King Henry the VIII of England often illustrate him with his toe or foot bandaged and elevated, suffering the pain of gout.

Gout has been called the “rich man’s disease” since it is associated with obesity and the consumption of too much rich food and alcohol. However, it affects people from all walks of life, most commonly men (90%) between the ages of 40 and 50. Gout pain can be increased and induced by calorie-restrictive dieting, drinking, certain medications, overeating, stress, and surgery or injury to a joint.

Several other diseases, including rheumatoid arthritis, infections and pseudogout, can mimic the joint symptoms of gout. Pseudogout is another form of arthritis that occurs in the larger joints—usually knees, wrists or ankles—caused by the development or deposition of calcium pyrophosphate dihydrate crystals. The best method for getting a definitive diagnosis of gout is by taking a joint fluid sample by needle aspiration and examining the joint fluid for the characteristic uric acid crystals.

(4) the use of nutritional substances to prevent further attacks

(5) the use of herbal and nutritional substances to inhibit the inflammatory process.

Urinary 24-hour uric acid levels can be used to monitor the effectiveness of dietary therapy.

Note: The dietary recommendations and considerations described below contain foods to which some individuals may have food allergies, intolerances and sensitivities. In those cases, those foods should be avoided. Dietary choices should be modified to meet your personal dietary needs. Consult with EZBalance for further information regarding nutrition and your individual medical condition and for a comprehensive gout prevention/management protocol.

Just to provide a little more information, I have gout. I’ve only had three flares in my life, but man were they memorable! The first time it happened was after a birthday celebration where I drank and had a ton of seafood. I also had an attack due, I think, to too much plyometric (jumping) exercises. The last one I had was after a liver and colon detox and luckily that was the last one I ever had. I do drink celery juice often, take milk thistle daily and now do gentler exercise like walking, hiking and yoga.

Erin Williams, MSN CN LMP, is the founder of EZBalance.com, a health and wellness company established in 2001. Erin has a bachelor’s degree in Chemistry from Purdue, a master’s degree in Nutrition from Bastyr University, and is currently studying to become a Functional Medicine Practitioner. Erin enjoys sharing her love of natural health and wellness with people through lectures, blogs, and consultations.