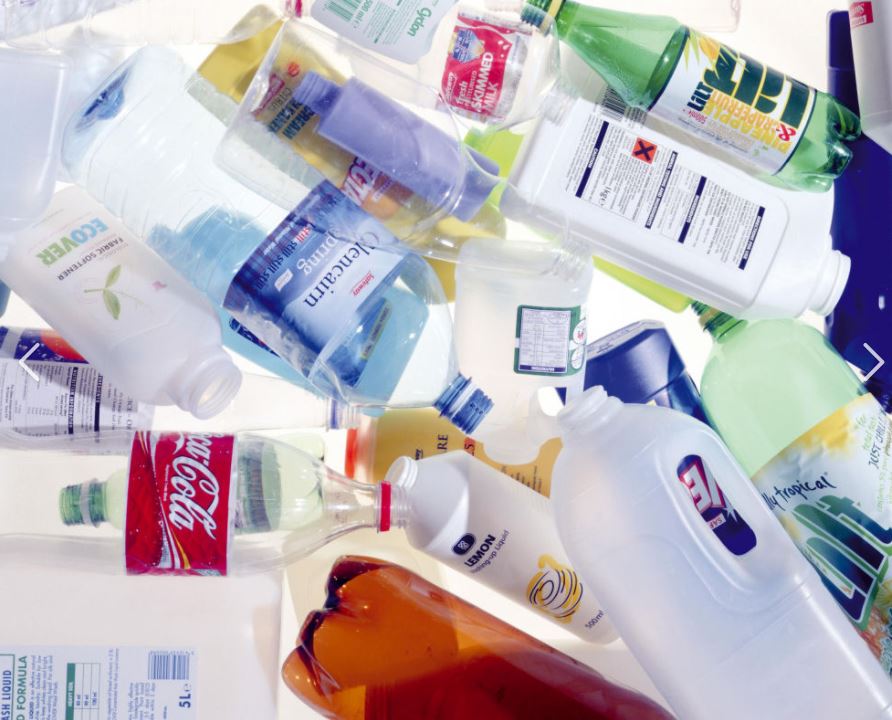 As Madonna sings, we live in a material world, and unfortunately, that material is plastic. Most Americans don’t think twice about drinking out of plastic bottles or plastic touching their food.  Most product and food staples are purchased in plastic bags or containers, cans are lined with plastic, leftovers are saved in plastic, food is microwaved in plastic, and often even eaten with plastic utensils! In fact, to date, humankind has produced 8,300 million metric tons of plastics with an exponentially growing production.8   It’s so ubiquitous that that most people think it’s innocuous.

In the last decade or more though, a lot of really disturbing information has emerged regarding the health of plastic. Some plastics are well known for their negative health effects, like Bisphenol A (BPA), but what about other plastics, and are we safe with BPA-free labeled items?

Questions around BPA have caused consumers to question other materials and plastics —and we are discovering that all plastic dishware, storage and cooking containers leave a trace of the plastic chemical in our foods and beverages.  Often, the risk of plastic degradation has a lot to do with manufacturing practices and the temperature and/or acidity of products stored in them.  That and the fact that plastics are rarely recycled and are very bad for the environment is the reason that my family only eats and drinks from ceramic, glass, or stainless steel.

Here are some of the types of plastics and materials that have negative health effects:

Polyethylene Terephthalate (PET) is used in soda bottles, water bottles, nut-butter containers, cooking oil bottles, and detergent/cleanser bottles. You can tell if you are holding a bottle containing PET by looking at the recycling symbol on its bottom. In this case, that symbol is a 1.

There are numerous byproducts that migrate our or in other words release out of plastics.  In particular, for PET, those are acetaldehyde, the metal antimony, and phthalate acid esters (PAEs or phthalates, risks discussed below).  Antimony is more of a risk with high temperatures9 and acidic foods/beverages and is a toxic heavy metal associated with lung and heart diseases and menstrual irregularities.10

Polyethylene (PE) is used in milk and water jugs, plastic produce bags and grocery sacks, yogurt cups and food-storage containers. High density polyethylene (HDPE) has the number 2 as its recycling symbol, while low density polyethylene (LDPE) has a number 4. Potential side effects of PE are hyperactivity and increased cancer risk.

Migrated byproducts of PE include Butylated Hydroxyl Toluene (BHT), as well as Chimassorb 81, Irganox PS 800, Irganix 1076, Irganox 1010 … all not natural nor nutritive meaning the body has to identify it, process it, or store it with no positive effects to us (and often very detrimental side effects).  In particular, BHT is correlated with risks of cancer and asthma and is also found to disrupt behavior in children.

Polypropylene (PP) is considered by the Environmental Protection Agency (EPA) to be a safer choice than some other types of plastics.  It’s used in potato chip bags, food containers like yogurt, cream cheese, and butter.  It has a high heat tolerance and therefore leaches a lot less into our food and beverages than other types of plastic.  PP is also used in textiles such as indoor and outdoor rugs.

Polystyrene(PS), which is used in disposable plates and cutlery, Styrofoam cups, meat trays and egg cartons, foam take-out food containers and cups, and foam packing material. PS can migrate into food and once eaten, stores in fat cells in the body. PS’s potential side effects are elevated rates of lymphatic and hematopoietic cancers for workers in polystyrene facilities and increased cancer risk in animals.  So that hot beverage in a Styrofoam cup is putting cancer causing chemicals into your fat cells. Polystyrene has the number 6 as its recycling symbol.

Polystyrene, styrene, and Styrofoam are not only carcinogenic meaning they cause cancer, but they are an environmental nightmare.

Polycarbonates, all plastics without recycling symbols 1-6, Tupperware, oven baking bags, other plastic containers with recycling symbol #7. This is a catch-all category for plastic that doesn’t fall into the other categories. It contains BPA and is generally not considered safe.  These plastics are suspected of increasing the risk of adult reproductive cancers, obesity, heart disease, and type 2 diabetes.12

Phthalate Acid Esters (PAEs), commonly called phthalates, which are used in pesticides on plants, so it accumulates in livestock we eat; plastic packaging and wrappers and is used in most molded plastics.

Phthalates are also used in nail polish, we aren’t just eating it, we are breathing it in, and it can bioaccumulate (build up in our bodies over time).

Bisphenol-A (BPA) is used in baby bottles, toys, pacifiers and sippy cups, food storage containers and plastic microwavable plates, ovenware, utensils, tooth sealants, plastic milk and water bottles, and in the lining of the majority of aluminum cans (beer, soda, sparkling water) and canned foods.   Polycarbonates with BPA have the number 7 as their recycling symbol.

BPA leaches into food and water supplies easily. More than 93 percent of the urine samples examined in a CDC study contained BPA concentrations. 14 BPA is not only easily absorbed, it’s easily transferred through the body and passed along during pregnancy (in the uterus).

BPA imitates the hormone estradiol, a form of estrogen, and is released when heated, washed or exposed to acidic foods. Since it imitates estradiol it is called an endocrine disruptor. Potential side effects in animal studies include increased risk for certain cancers, hyperactivity, early puberty, increased fat formation, abnormal sexual behavior, disrupted reproductive cycles and structural damage to the brain. 5

In 2008 the FDA stated that BPA in plastic was safe, but after more research there is now a ban on BPA baby bottles in New York, Maine, Oregon, California, Washington, Wisconsin and several other states, as well as in Canada and the European Union.

The growing concern around BPA has led to the marketing of several types of BPA-free plastics. Some might be BPA free, like polypropylene, but most manufacturers have only replaced BPA with bisphenol-S (BPS) an equally risky chemical!15  BPS shows up in urine concentrations at levels similar to those of BPA–an indication that manufacturers are simply switching one for the other, while still being able to advertise their products as “BPA-free.” A 2012 study4 found 81 percent of those tested from the United States and seven Asian countries had BPS in their urine. 15

Teflon (polytetrafluoroethylene, PTFE) is used for nonstick coatings on pots and pans, microwave popcorn containers, candy wrappers and pizza boxes. Potential side effects include degradation of gas byproducts that can be lethal to birds, birth defects in humans, and possible thyroid interaction if inhaled during cooking or ingested if the Teflon surface is scratched or damaged from high heat.

Per- and/or Polyfluoroalkyl Substances (PFAS)

Per- and polyfluoroalkyl substances (PFAS), are a group of chemicals belonging to a single class. PFASs include PFOA, PFOS, and GenX and are common food and drinking water contaminants as a result of industrial releases, firefighting foams, and from food packaging.  They are not known to break down in the environment and they move through soil to drinking water and from food packaging into food.

PFASs are found in microwave popcorn bags, takeout packaging, non-stick cookware, and takeout packaging (even those that look compostable!).  PFAS can build up in crops, fish, and livestock, ultimately contaminating the food we eat and the water we drink.

It is important to note that almost every item we come in contact to has a risk to us, even water. It’s the dose that makes the poison.  (My kids have asked, so I’ll set your mind at ease, you would have to drink about 5 gallons of water in an hour to create an issue and you undoubtably would throw up first.  Don’t try to breath it in though, that’s called drowning, and that’s no fun.)

8 Steps to Safer Container Use

There are simple steps you can take to protect yourself and your family.

With time, and advocacy, companies do change their ways.  McDonalds Corporation, in Jan 2021, just announced that they intend to eliminate PFAS in packaging materials by 2025 – great news – https://corporate.mcdonalds.com/corpmcd/our-purpose-and-impact/our-planet/packaging-and-waste.html/asdf

Amazon as well is reducing the use of toxic chemicals and plastics in food packaging. PFAS, phthalates, PCV, PS and BPA are among the chemicals now prohibited for use in their Amazon-owned private brand Amazon Kitchen in the U.S. and EU.  https://sustainability.aboutamazon.com/environment/packaging-and-products/chemicals

Erin Williams, MSN CN LMP, is the founder of EZBalance.com, a health and wellness company established in 2001. Erin has a bachelor’s degree in Chemistry from Purdue, a master’s degree in Nutrition from Bastyr University, and is currently studying to become a Functional Medicine Practitioner. Erin enjoys sharing her love of natural health and wellness with people through lectures, blogs, and consultations.